Life is full of adventures. Each one opening up a new chapter. Even within these adventures there are smaller chapters. Our latest trip to the Yukon had a few so I think I will break it up into 3 or 4 separate blogs.
Andrew and Neil shared Chapter One: The Journey North together while I stayed behind to be a bridesmaid at one of my best friends wedding. That in itself was another amazing chapter! After dancing all night I headed straight to the airport without any sleep to catch my flight up to Whitehorse. I was filled with excitement as it was one of my favourite places on our whole Pan-American trip. As soon as we had left the north the last time, we started scheming another trip.
Paddling the Yukon River seemed like the ultimate way to really immerse ourselves in an area of our country that we wanted to get to know more intimately. We invited a couple close friends, ones that we knew would love the trip and would be easy to travel with.
The stretch of river that we planned to paddle was from Lake Laberge (Of Sam McGee fame) to Dawson City. A river trip of 655 kilometers was a pretty big undertaking for those of use who haven't done more than a 2-3 day river trips! But we knew we were up to the task.
While I was crazy busy with school and organizing the inaugural Ski Sisters Racing Camp, Andrew was busy planning the trip and trying to coordinate with our friends. Apparently the easiest way to do this was to inform them that we were leaving from Deep Creek on Lake Laberge on the 6th, and if they wanted to come, we should meet a couple days before at the campground in Whitehorse.
Kahung, Mel and Dante Law, who we first met on a ferry crossing from the Baja peninsula to mainland Mexico, were on an adventure of their own driving from Kingston, ON to the Yukon. We were fairly sure they were coming, but we didn't know for sure until actually seeing them on the 4th in Whitehorse.
The others we invited were a couple that I have know for years. Jeff, Alli and I competed together on the Alberta Provincial ski team about 8 years ago! They were both doing geologic work up north and had told us they really wanted to come, but wouldn't be able to confirm till the last minute. As we went to pick up our canoes on the 4th, we had pretty much written them off. However, after driving out of service range to get the canoes, I arrived back in Whitehorse to a voicemail. When I checked it I heard Jeff's voice, "WE'RE COMING! Alli is stuck in Alaska, but we are coming! We may not make it for the 6th but we're coming!"
Crazy. Unfortunately he was unreachable and we were on a little bit of a time schedule so we left him an email basically saying, I hope you can catch up!
Anyway, back to Chapter 2: Lake Laberge to Carmacks. That was the stretch that we would be doing with the Law's as they had plans to brave the Dempster Highway as we did 2 years ago. Here is Chapter 2 in pictures: Here is the detailed map of our route along the Yukon river from Whitehorse to Dawson City. You can zoom in or out to check out the river or to see where we are.

Dante Law, super stoked that we were there! 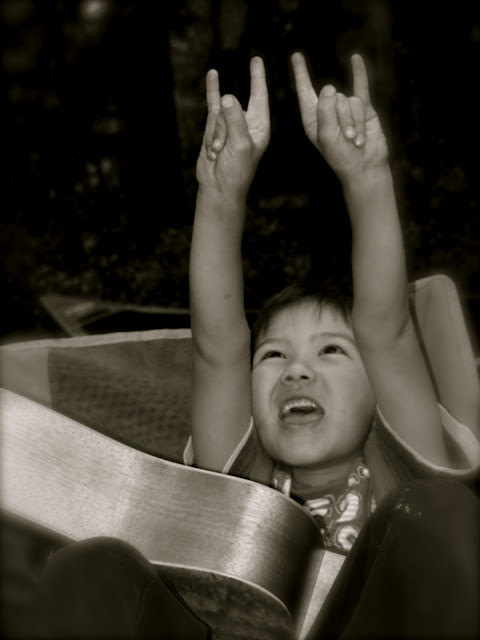 Last bit of organizing before leaving the comfort of our vans. 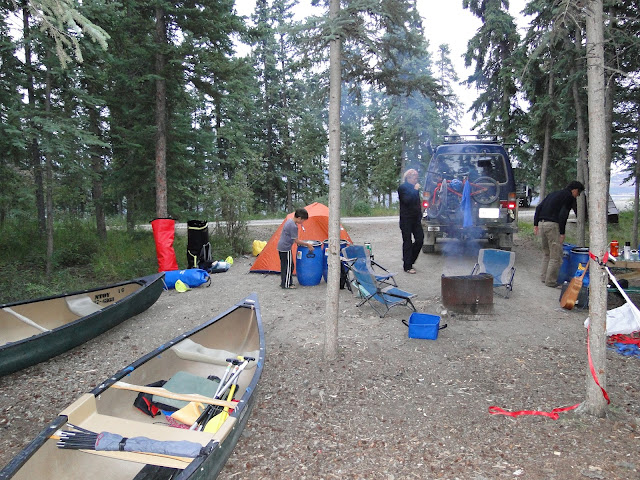 Kahung and Dante scoping Lake Laberge the night before our departure. 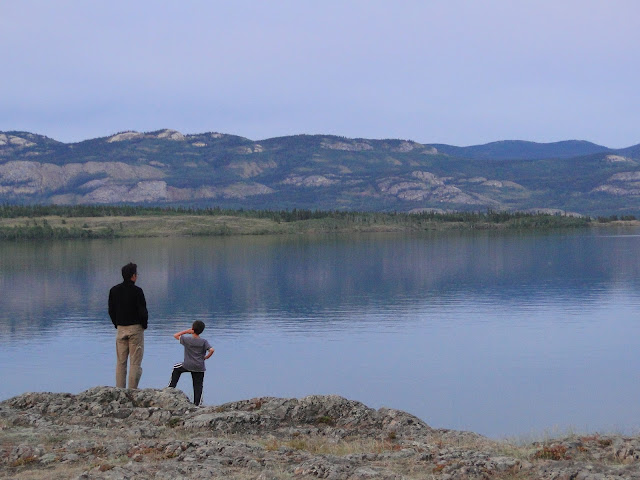 The day of paddling the lake was a LONG one. 36 kilometres of non stop paddling. I think I have decided that canoeing in Ontario is not for me! Luckily the last few kilometres the wind picked up enough for us to construct a sail which was a huge relief to our tired arms. 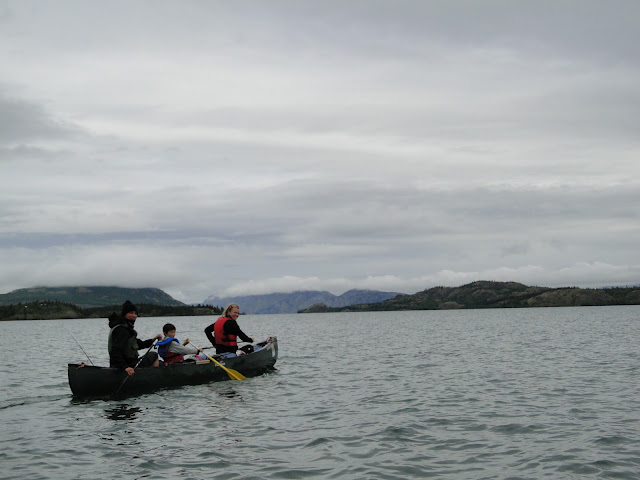 At the end of the lake we were greeted with an great camp spot filled with amazing history. 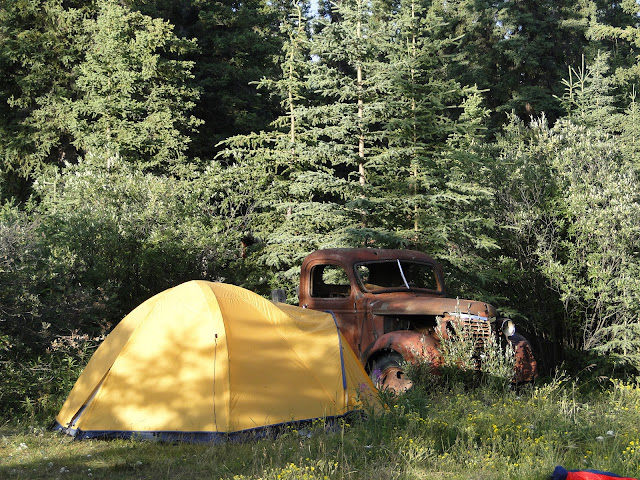 Our canoes loaded and ready for the river. 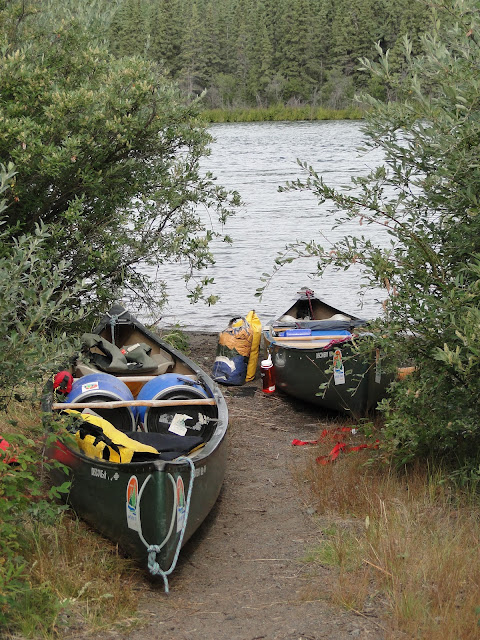 Setting out on the river after the long day of lake paddling was a little slice of heaven. It was everything we had hoped for and more. Stunning scenery, exciting wildlife and beautiful camp spots. There is definitely something to be said for travelling great distance without need for a motor. All our own power (and some pretty substantial help from gravity!) 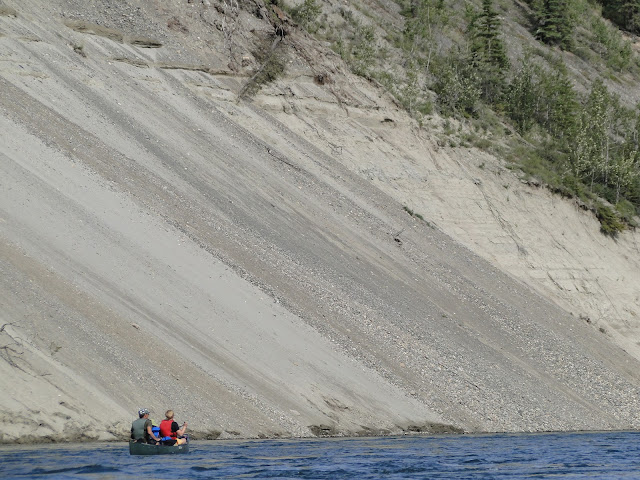 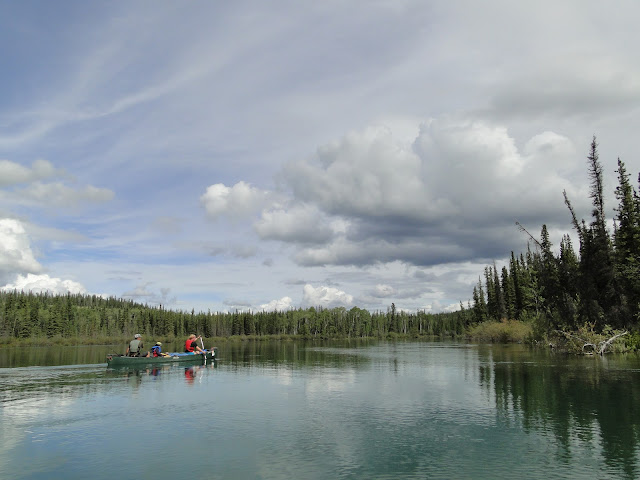 The Yukon River is stuffed full of history. If I had known how many boats sank and how many men lost their lives on this river before we set off, it may have made me hesitate for more than a few seconds! During the late 1800s and early 1900s there were quite a number of settlements along the river due to the crazy gold bonanza. This steamer was "The Evelyn." Just one of the multitude of boats that was claimed by the mighty Yukon. 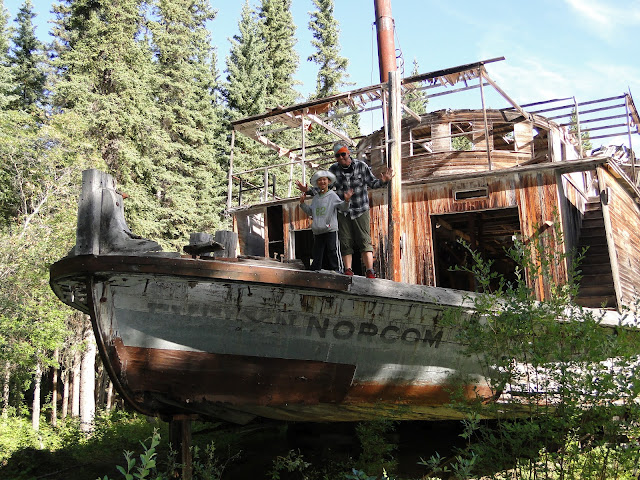 Andrew made sure that we take a few fishing breaks. Dante got into it too and fishing ended up being his top highlight of the trip! 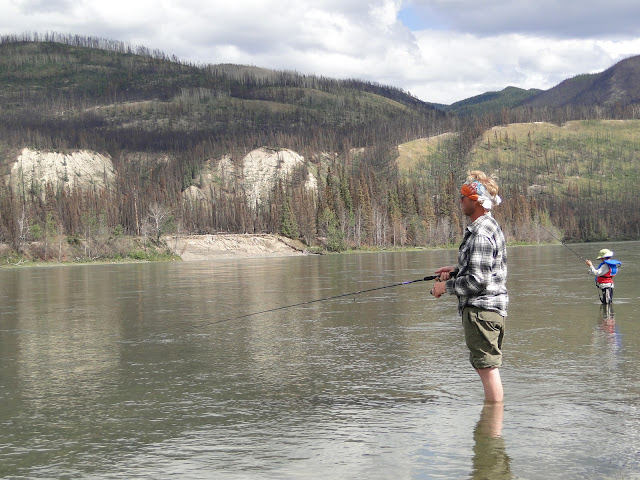 Catching Grayling, unfortunately all the fish we caught on this stretch were just a bit too little to fry up. 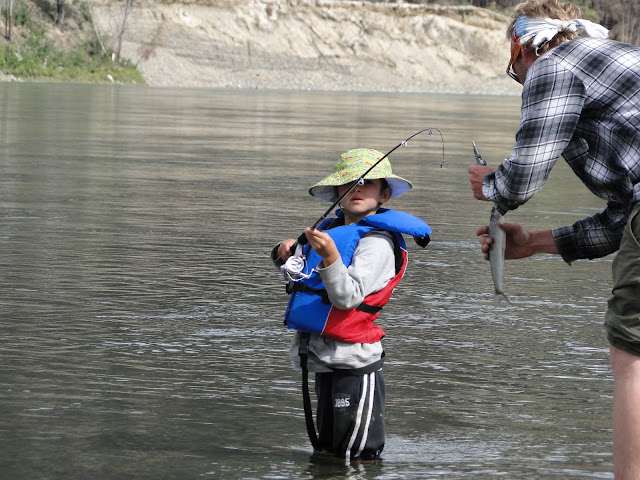 No matter how cold the river, Kahung had to have his daily dip! 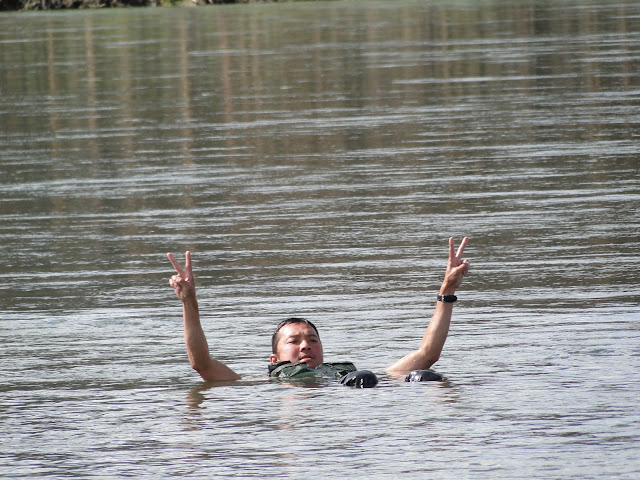 It was pretty special to see moose and beavers from so close up. I don't think i'll ever get tired of spotting these guys! 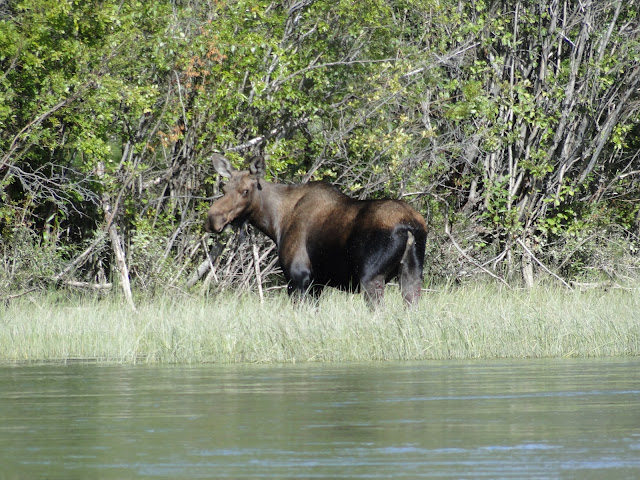 Bugs and I don't get along. So I came well prepared to enjoy my trip no matter how many bugs there were. Luckily this only had to come out on one occasion! I think the lesson here is if you want to visit the north, August is definitely the opportune time!! 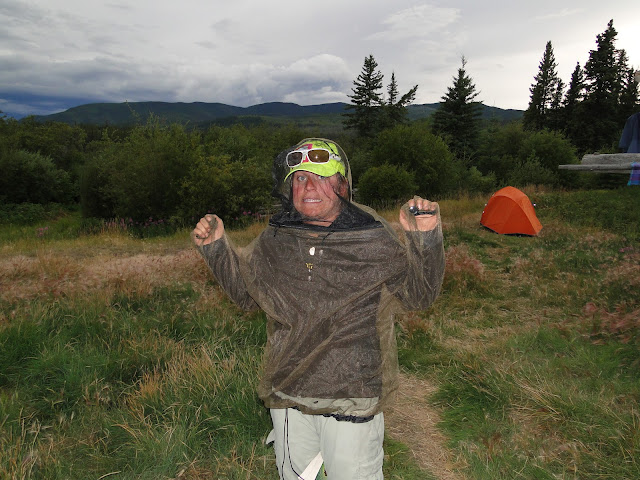 We luckily were only hit with one day of rain on this section of the river. This is our refuge after the night of rain. It was a more recently built cabin with a great wood stove that helped dry out our gear. Then we headed out on the water for a full 60km of paddling in the rain! 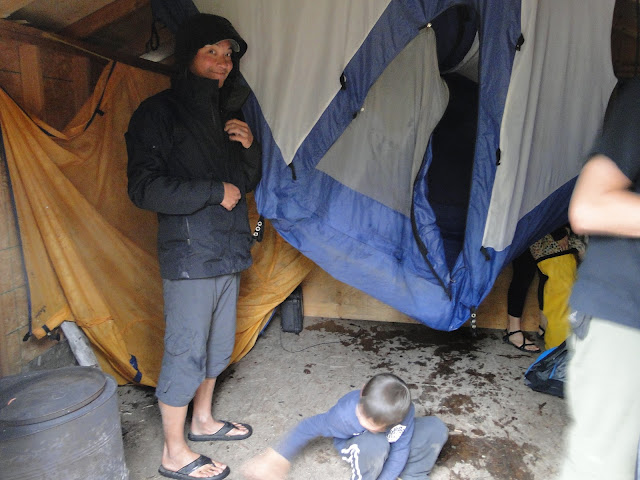 Setting up camp in the rain. The tarp was a last minute addition from my dad and came in handy on numerous occasions including acting as our trusty sail on the lake! We were lucky enough to come across a camp with a fire that was still smouldering and we got some heat to our chilled bones nice and quick! 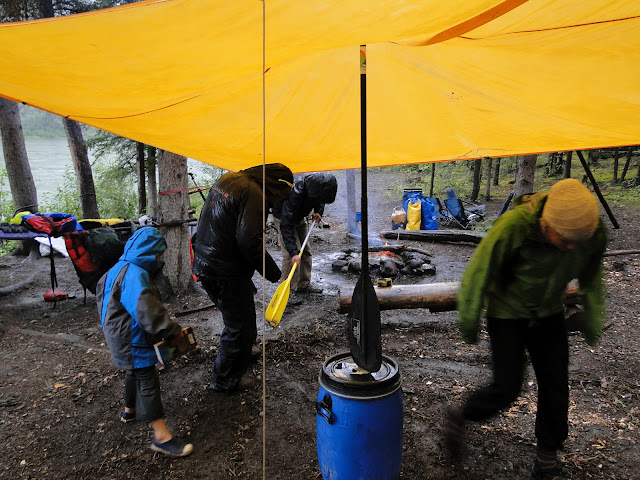 After 5 days on the river we made it to Carmacks and reunited with the Tardis (the van in the background). From here the Law's headed up to the Arctic circle with a loose plan to meet up in Dawson City nine days later. To celebrate a successful journey we busted out the good ol' jiffy pop! 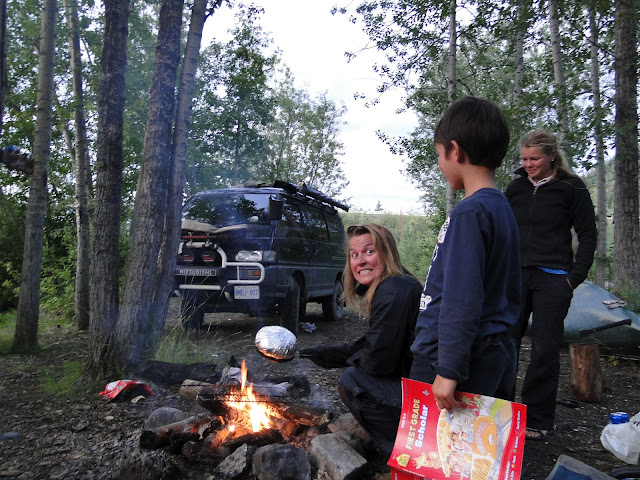 We had heard that Alli and Jeff had started out 2 days after us. We spent quite a lot of time trying to figure out how slowly we would have to go for them to catch up. We left them a note saying we would do 25 km a day for the next 4 and hopefully they would catch us. We also said we would string up the trusty orange tarp to make our camp noticeable.
To find out if they caught up you will have to tune in for the next chapter!!!
Posted by Shona at 10:31 AM