We did it! We painted Kumu, and she looks damnnnn fineeeeee. Okay fine, Voiteck painted it, but we did all the body work. Okay fine, Andrew did most of the body work, but I did help a bit! I am most likely responsible for the parts that are still bumpy and noticeable. Oops! Anyways, here are the updated pictures of our baby!
Before Painting/After Body Work
Just being the bas ass duo that we are. 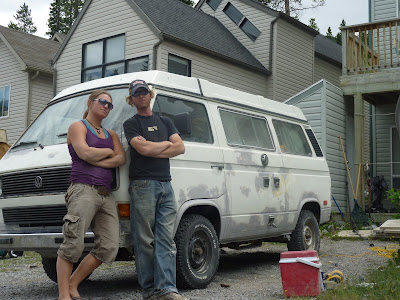 During Paining.
Voiteck working his magic and giving light to our new home! 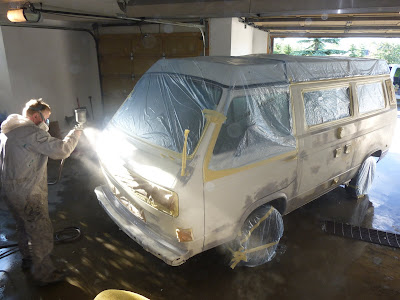 After.
Looking like a fluffy white cloud of perfection. 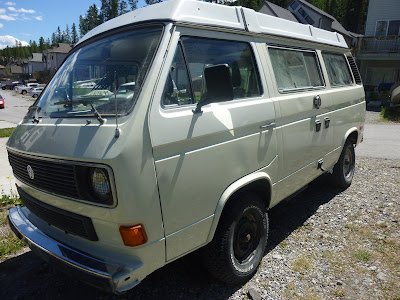 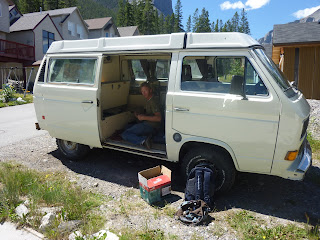 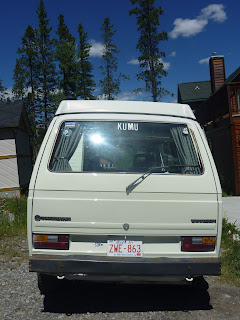 A huge, huge, huge, huge thank you goes out to Voiteck for his amazing help and his insistance on perfection. And I apologize in advance if that is not the way you spell your name....
Posted by Shona at 8:15 PM 1 comment:

I Just Wanna Live While Im Alive, Its. My. Life

It's my life
It's now or never
But I ain't gonna live forever
I just want to live while I'm alive
(It's my life)
My heart is like an open highway
Like Frankie said, I did it my way
I just wanna live while I'm alive
It's my life
-Bon Jovi
Who needs therapists when we can just listen to the lyrics of rock songs? Honestly, they've got it going on. Whenever I am down, I just throw on some good ol' 80's rock and it reminds me to go out there and do it. Because like Bon Jovi so eloquently states, 'Its now or never'. That's basically how we feel about this trip, if not now, then when? But I get ahead of myself... I was talking about Bon Jovi. Now most people, I truly believe, have a hard time really disliking Bon Jovi. Many people say they do, but you throw on "Livin' on a Prayer" and within no time they are singing along and rocking out. Its true, try it sometime. I, on the other hand, have no problem proudly stating that I am a Bon Jovi fan and I don't care who knows it!
There definitely were not too many people sitting still at the concert in Calgary on Wednesday night. Even with a 'calf injury' John still rocked out like it was 1983. 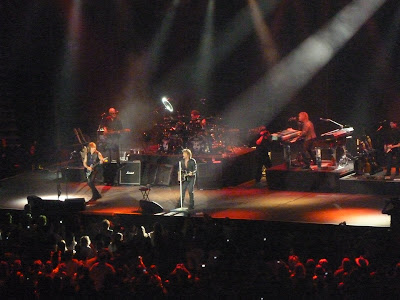 JBJ Rockin' out at the Dome 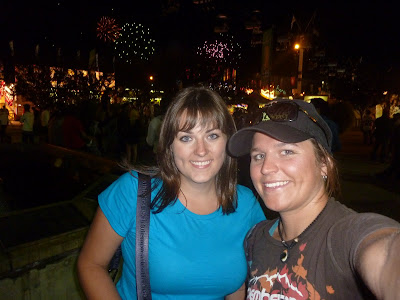 Ava and I watching the fireworks at the Stampede after the amazing show!
So basically what I am trying to say is (again using the unchallenged eloquence of JBJ):
First time I heard the music
I thought it was my own
I could feel it in my heartbeat
I could feel it in my bones
My momma thinks I'm crazy
My dad says I'm insane
I got this boogie woogie fever
That's burning in my veins
All I want, is to be a Rolling Stone
They don't understand what we all know
It feels so good that it ought to be illegal
I got my vaccination from a phonograph needle
I'll never grow up and I'll never grow old
Blame it on the love of rock & roll
Posted by Shona at 5:21 PM 1 comment:

Well I figure its about time I add something to the blog. I have been working like a dog trying to save up some denieros to make this trip possible by helping to build a house in the little hamlet of Lac Des Arcs. The guys I work with are rad, and I am learning a ton along the way too.
We both decided that we should get Kumu in tip top shape before we depart (only 5 weeks away now!) and in that we both decided a makeover was in order - more so she doesn't fall apart from rust than for style...
So I took on what I thought was going to be a nice little hobby of doing the body work, little did I know that it would consume my every waking hour for the last 3 weeks!!!!!!
First came the removal of the rust...... 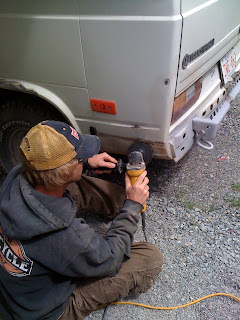 Then loads and loads of sanding; both before and after the primer. 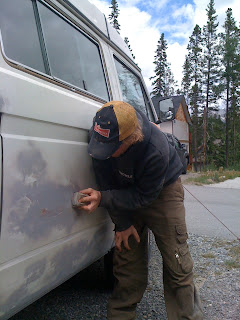 With a little luck and a lot of after work hours, hopefully she'll be done in time for our buddy to paint her up this Friday....
After this, hopefully the rest of the tasks won't be too time consuming so I can enjoy a little chill time........
So, I am sure you all saw Shona's detailed recount of her history and what brought her to here in her first post..... Well I can tell you that I am not an Olympian nor a Canadian champion. I am simply a guy who decided being a physicist wasn't the path for me right now, and decided to take a risk and move across the country to follow a true passion of mine, skiing. I landed a job in Kimberley BC as a ski coach, wow, nine years ago, and never really looked back. Quickly I realized that skiing and travelling the world were key to my happiness and have been doing so ever since. Each winter I ended up back in western Canada with an amazing adventure south almost every summer. Now, I have actually found someone crazy enough to drop almost everything and have no serious endpoint to go with me....... I have deemed this one the Mega trip. Let the games begin.
Posted by Andrew at 10:48 PM No comments:

I know I must do better than this if I want to keep up an entertaining blog like some people I know. (i.e. Kelly McBroom and Anna Goodman). We actually have been quite busy the last couple weeks which is the lame excuse for my poor blogging skills.
Andrew has been hard at work on Kumu. Sanding, bonding, priming and sanding some more. I did help out, but I dont think I was made to do work like that. I may possibly have a mild case of ADD which causes me to work in a non-logical manner which basically just makes the whole process go slower. Ergo, I did a small part but I really think it's best left to Andrew. that being said we should be done today or tomorrow which means we can get it PAINTED! Yahoo!! No more rust bucket for us! Check back soon for updated pictures! Andrew has also been hard at work builing a house in beautiful Lac des Arc. Not a bad summer job... except when it rains ALL the time.
As for me, I had my first official coaching job with Lake Louise Ski Club on a one week camp down in Mt Hood, Oregon with Pierre Luc Dumoulin. Despite Mt. Hood being a summer training resort frequented by many teams, it was actually my first time there. We missed 2 out of 7 days on snow because of rain and 90 mile an hour winds. But thats okay, we made up for it by going to OMSI! Portlands sweet science center. We also managed a day trip to Hood River where it was over +30, so that was pretty great too! 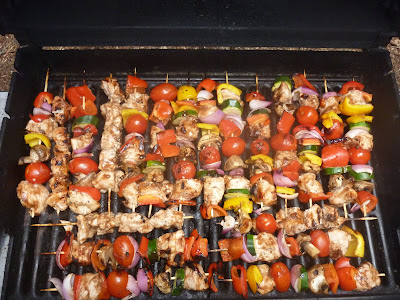 Cooking for 13 was a bit of a chore, but we made it look good! 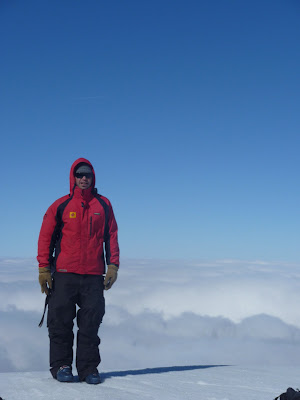 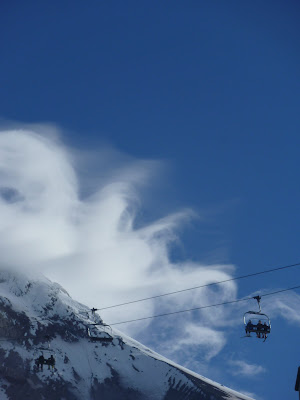 Crazy clouds from the crazy wind 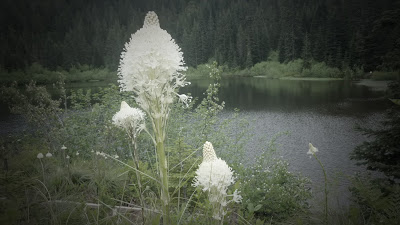 Up at mirror lake 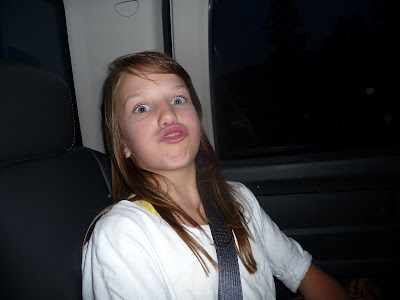 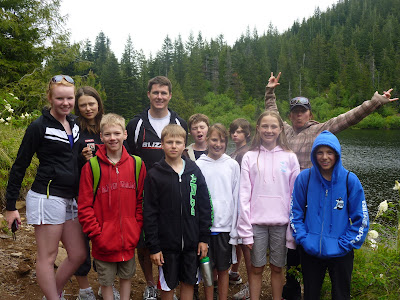 The whole crew (sans PL) up at Mirror Lake 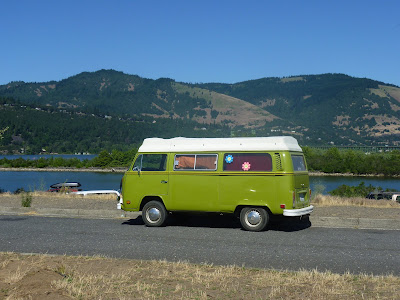 Love at first sight.
I feel pretty good about my first coaching experience. I really felt like if I could make just one kid better, or get a little more stoked about skiing I had done my job. Because when it comes down to it, skiing is a super radical sport and we SHOULD be stoked about it. And we should all really enjoy the feeling of the freedom of being out in nature and ripping down the mountainside. If I can get a few kids to recognize that, I am happy.
As for the upcoming adventures, well, we are on a countdown of about 5 weeks. Its coming up fast and there is still a lot to take care of, but it does feel a bit like waiting. The anticipation level is rising, and both of us just want to get on the road.
Also, just right now, I have decided to start each blog with a song title... or a song lyric... It will be interesting how far I have to stretch my writing to make the subject relevant.
Until next time (hopfully sooner than last time!)
*The Waiting-Tom Petty*
Posted by Shona at 2:58 PM No comments: